Today, in 1915, Albert Einstein revealed to the world “The Field Equations of Gravitation,” the title of the paper that completed his General Theory of Relativity. (Here’s an English translation of the paper.) It’s hard to overstate the monumental achievement of this work. Einstein was self-motivated to labor on this problem; it was not of general interest to the physics community at that time. As a result, he was working essentially alone. This is in contrast to his earlier work in Special Relativity, Brownian motion, and the photoelectric effect.  Those areas were, at the time of Einstein’s efforts, quite popular and attracted many other physicists; the scientific community buzzing with new ideas on those topics.

Einstein’s path in puzzling out gravity was both solitary and personal.  His interest in General Relativity was born out of a simple fact known to every scientist: the inertial mass of an object (the difficulty in pushing an object in a new direction) was, within the most precise experimental limits, identically equal to the gravitational mass of an object (the pull the Earth has on it). How old was this concept? So old it was one of the first scientific observations made in the modern era. You may have heard about it: it’s the famous result of Galileo tossing cannonballs off the Tower of Pisa. No one was significantly bothered by this inertial-gravitational equivalence, however, until Einstein came along.

Much as Einstein reimagined our fundamental view of nature with his invention of the photon to explain the photoelectric effect, he changed thousands of years of cultural thought about gravity with his idea of the warped field. Under General Relativity, gravity was no longer a force acting at a distance.  Rather, it was simply a result of “straight-line” motion in a curved space-time field, a field warped by the presence of objects.

And, as is typical of Einstein, his interpretation of his model became the scientific de rigueur of reality. This contrasts greatly to both Isaac Newton’s and James Maxwell’s interpretations of their theories on classical mechanics and electromagnetic field theory, respectively, for their interpretations bear little resemblance to how the theories are taught today in universities.

Einstein made three specific predictions with his new theory. The first concerned Mercury’s orbit which was known to wobble slightly in a way that couldn’t be predicted by Newton’s Gravity Theory. Einstein showed his own theory could both predict the wobble and do so within observational accuracy. In fact, he revealed this calculation the week before he published his November 25, 1915 paper. Einstein also used his gravity-is-warped-space theory to predict that light would “bend” in space – a prediction proved accurate four years later in 1919. Einstein’s final predication is that light waves would get longer (or “red shift”) in the presence of gravity – which also proved accurate nearly 40 years later in 1954. Of course, these latter two predictions have absolutely no explanation in classical physics: since photons have no mass, Newtonian gravity shouldn’t affect light at all.

Just one month after Einstein’s theory was published, Karl Schwarzschild – while literally fighting in World War I – solved Einstein’s field equations exactly.  (Einstein had only solved them in an approximate manner.)  Schwarzschild’s exact solution led to a surprising and controversial (at the time) result but today we understand it as the first prediction of black holes. Observational evidence of black holes, again a concept completely outside the realm of classical physics, only began mounting since 1972. The detection of gravity waves in 2015 – something also predicted by Einstein’s theory – provided further strong evidence of black holes since the detected waves are most simply modeled as two black holes spiraling in on each other until collision.

Einstein’s General Theory of Relativity was made in a time when we thought the Milky Way galaxy, our galaxy, was literally the only thing in the Universe. It was 9 years later that Edwin Hubble famously showed that Andromeda was also a galaxy and outside of our own. Einstein’s theory was also completed before Quantum Mechanics was fully developed. It wasn’t until 10 years after Einstein published his paper that Erwin Schrödinger was able to formulate an equation of wave-particles and Werner Heisenberg created the Uncertainty Principle.

So, Einstein, working essentially on his own in an obscure area of physics which had not attracted the serious attention of scientists for 300 years, advanced a fully complete theory that pre-dates our modern understanding of both the Universe and the Atomic World. And his theory survived, totally intact, those revolutionary upheavals in scientific thought. In the more than hundred years since publication, the theory’s predictions have been found real and calculable with remarkable accuracy. Einstein’s theory arrived in whole, well before experimental motivation (unless you count Galileo’s cannonballs), and it reshaped our perception of reality.

And it all came from a single human mind. There is nothing else in scientific advancement, before or since, with which to compare this incredible achievement. Today, November 25, let us celebrate the potential of the human mind – its potential in science and its potential elsewhere. 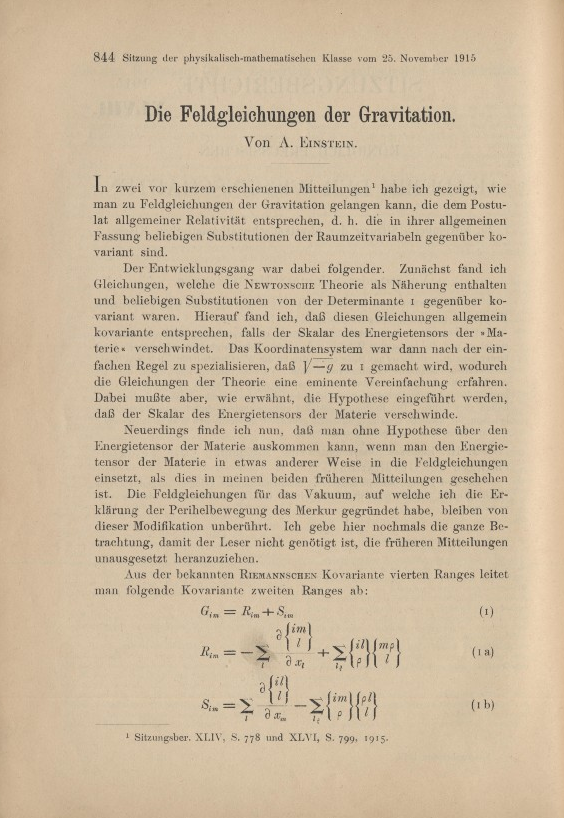