So, it turns out that no one knows exactly what day William Shakespeare was born.  We know it was near the end of April 1564.  Scholars believe he was born on the 23rd since he was baptized on the 26th.  However, since 1582 lost 10 days when we adopted our present Gregorian calendar, there’s a lot of error in the time-reckoning system.  But still:  Happy birthday, Shakespeare!

Admittedly, I’m not the Bard’s biggest fan.  But I’m in good company.  For example, unlike Sir Paul McCartney and Sir Mick Jagger, Bill never got knighted.  And he never won a Tony, let alone an Oscar.  But he did give the world the idea that the best writers are bald and, for that, we – or at very least, I – must thank him profusely.

What other lessons does the 16th century playwright teach?

My interactions with Shakespeare have been slight at best.  In high school, I was only ever assigned one of his plays, Macbeth.  This play was a big deal in Mr. K’s junior year honor’s English class.  We each received (at taxpayer’s expense) our own copy of the play.  The reason?  We were going to actually write in the book.  Yes, defying the previous 11 years of admonishments, we now were to learn that budding scholars write in books.  In fact, we went over the entire play line-by-line in class and had to copy word-for-word Mr. K’s  talking points (from wherever he got them) in the exact proper spot in the text.  He would occasionally check to see that each of our books were suitably marked – your grade was lowered if you didn’t get it exactly as he said it and put it exactly where he wanted it placed.

Somehow this was to prepare us for college.

Looking back, however, I think this multi-week dictation exercise was just a cover for Mr. K’s real purpose: to give us a modern appreciate of Shakespeare by spending four class periods screening Roman Polanski’s 1971 film Macbeth once we finished studying the play.  In our no-movie-theater little town, none of us knew who Polanski was but we certainly recognized the production company: Playboy.

Not only were we ignorant of Mr. Polanski, however, we were also ignorant that this was his first film made after the brutal murder of his wife and was therefore rather… umm… bloody.  Not quite Reservoir-Dogs-Stuck-In-The-Middle-With-You bloody, mind you, but Mr. K’s class was right after lunch and so you have to factor that in as well.  With more bloody bodies than bouncing boobies, the whole affair became a little nauseating as the cafeteria’s mystery meat worked its way through your system.  And sure, there was a hot Lady McB.  But, by the time you got to her, you’d already been exposed to naked, ancient, wrinkled, saggy witches.  As a result, you ended up developing a pretty clinical perspective of the human body (lest you lose your lunch over those images) which spoiled any of the fun we imagined Mr. Hefner might have provided under different circumstances.

I can’t help but think that the girls in class must have watched the boys with amusement as our sexual expectations withered faster than Macbeth’s political ones.

Aside from this classroom assignment, my interaction with Shakespeare was casual.  I knew that if a Star Trek episode title seemed obscure, it was probably lifted from him.  Didn’t matter whether we were talking old reruns (either the original or animated series), the next generation, or the generation after that.  And I admit that I’m one of “those guys” who – like a cultureless groundling thinking Bugs Bunny during Liszt or the Lone Ranger during Rossini – thought “I am the Walrus” when we got to that spot in a production of King Lear.  (“What, is she dead?  Sit you down, father.  Rest you!”)

Such was the state of my relationship with the Bard for a number of years.  If asked, I would go to see the occasional production but I was as ambivalent as Hamlet about the whole activity.  I don’t know what it is about William Shakespeare that brings out an actor’s inner William Shatner.  Shakespeare wrote histories, not histrionics.  For some reason actors can’t help themselves.  “Seduced by the language” is a phrase I’ve heard.  I came to believe that what Shakespeare needed was a decent translation into English!

But Los Angeles is a place where anything can happen and through chance I was given an incredible opportunity to sit in on a four-month Shakespearean acting class taught by a well-known actor who also happens to have a life-long passion for the Bard.

So I took it. (Yes, people who write for performance should go to acting classes!)

And what a lucky break for me.  Here are just some of the things I learned about the plain pated playwright:

He made up a lot of words.  He had to.  Like Dr. Seuss discovered later, it’s tough to write in a strict meter 24/7 and make the syllable beats work out continuously.  It’s much easier to keep the rhythm thumping – and describe life at Cambridge University – when you can simply introduce words like puking, obscene, hot-blooded, hoober-bloob, and wormhole as needed.  Okay, hoober-bloob is from Dr. Seuss but it also describes life at Cambridge.  And, yes, you need the word wormhole at Cambridge – that’s where Stephen Hawking teaches. 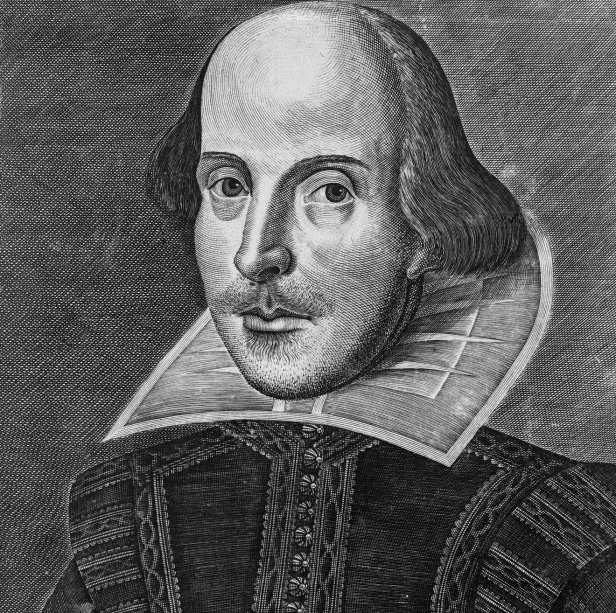 Falling asleep while watching a Shakespearean play?  It’s not your fault.  It’s the acting.  Ever see a person talk loudly, practically shouting, at a non-English speaker in the hopes that what is lacking in clarity will be rectified by volume?

Ever see shouting during a Shakespearean play?

And then there is the classic seduced-by-the-language problem.  After all, you’ve got all those iambs to worry about and the temptation to bounce along with them is nearly irresistible.  Imagine reciting Edgar Allan Poe or Chuck Berry focusing on meter over meaning.  In short order, you’ve beaten any content out of the story and all you have left is the hypnotic sound of tuneful phonemes.  Toss in a narcissist who loves his own mellifluous voice and wants to sing a song of Shakespeare and you’ve got a potent snooze-inducing recipe that could destroy the world market for Ambien.

Shakespeare’s sound was that of a good ol’ boy.  Yep.  Scholars tell us that the isolated area of the Ozarks preserved the Elizabethan English accent of those that settled there.  So Hamlet’s voice is more Bill Clinton than Richard Burton. Which would make the whole “to be or not to be” thing kinda funny since Clinton had a hard time even defining the meaning of the word “is.”

The problems start with how we received Shakespeare’s plays.  The first authorized collection was published a few years after his death.  This book’s production was the high-tech of its day.  The printer even had to import the paper from France (and you know how the English feel about anything French) because English paper at the time wasn’t worth the paper it was printed on.  And if you think the issue of spelling is bad, it gets worse:  punctuation was essentially non-existent in the notes given to the printer.  That’s right:  mistakes like “Ill rest” versus “I’ll rest” could be introduced at the print shop.  Likely by a teenaged apprentice.  Who probably just wanted to live long enough to see a proper, naked Macbeth.

And worse: we rely heavily on punctuation marks that cluster words – the comma, the period, the semicolon – to understand the relative importance of the ideas buried in each sentence.  This is how we decide on proper intonation to make clear the meaning of the thought.  But suppose those marks are absent?  Or misplaced?  Or incorrect?

Think of all the dialogue in iambic pentameter recited on the Globe Theatre’s stage to great acclaim.  Its sentence structure gets to us only after being given a once-over by some barely literate 14-year old.  Just like that latest app on your smartphone.

Fortunately, it is possible to decode the English language without proper punctuation (ask James Joyce).  Shakespeare’s language is strong.  He wrote in terms of rhetoric.  He fills his dialogue with repetitions, antitheticals, and parentheticals that, when spoken correctly, sound just like perfectly normal modern English.  Ever read a straight transcription of an interview?  It’s nearly impossible to sort out and yet, when the same words were spoken aloud, the sentence structure was clear.  That is the true job of a Shakespearean actor:  to so fully understand the text that the verbal pauses, stops, starts, and general intonations make obvious the line’s intent to the audience.  Indeed, that is the job of any actor:  to take the lyrics of the writer and find the natural melody within.

If you are writing for performance, your words’ cadences should be so strong that the actors can find them.  Even without proper punctuation.  Even after 400 years.

It’s a bit like a very out-of-focus photograph of a Van Gogh painting.  The colors are bright and lovely but there is no specificity to the image’s structure to help the mind with interpretation.  The minute the camera focuses, however, the nuances and subtleties of the picture become visible and the colors now pop with a vibrancy and relevance not apparent before.  So it is, too, with the Bard’s dialogue.  Shakespeare’s meanings are clear when the actors understand his words and give them the readings he intended (regardless of printed punctuation).

My relationship with the old master is changing.  I can now hear both his joy of language and sophistication of expression.  What an amazing time to have been writing: when one was helping develop a language, a means of expression!  And so, on this, his birthday (more or less), I am reminded of and inspired by Shakespeare’s work.

Let us Live our Wills birth ev’ry day,
Using the Tongue as our place of Play.