Because it happened. Look what live tweeting and retweeting wrought:

If you find the print too small (even when you click on the image twice to expand it), here’s a blow up: 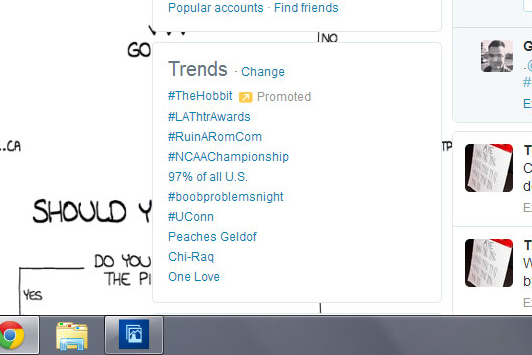 Do you see it? #LAThtrAwards trended.

On a night that the Twitterverse was mostly looking at the end of March Madness (and yes, UConn won, so there!), #LAThtrAwards broke through with such other hashtags like #RuinARomCom, #NCAAChampionship, and the ever popular #boobproblemsnight.

Yes, it’s true. LA theater was able to hold its ground against both basketball and… um… yeah.

And that’s saying something.

In fact, the hashtag had over 1.34 million impressions out “there”:

So where do we go from here? Since, just two weeks ago, the LADCC didn’t want people to tweet at all during their award ceremony, it’s safe to say the sky is the limit. Think you missed all the fun? No way! Feel free to go through the feed (it’s a record of what happened) and retweet your favorites. Or add comments or pictures to the stream (use the hashtag!). This set of tweets is now a data mine that can attract attention from people who might want to follow your Twitter account. There are a lot of uses for new technology tools and it’s up to the theater community to figure out how best to mobilize around them.

Let us not end up on the wrong side of the digital divide. Rather, let us be bold. The times demand it.

And, of course, the hashtag #LAThtrAwards is still available for all things LA Theater Awards. This was not a hashtag for just the LA Weekly Theater Awards. Any award will work. In fact, the next awards will likely be for the 2014 Hollywood Fringe Festival. Why, look! The Festival already has both a Twitter account and a hashtag. Can’t you just see it?

Thanks to Steven Leigh Morris (@StageRaw) and the LA Weekly who allowed those infernal gadgets to be taken out of the pockets and turned on, Zombie Joe and his Underground crew (@ZombieJoes) for both embracing and leading the digital revolution (tweeting about naked zombies was genius!), and @Gregory_Crafts and @A_Neutron for some interesting Internetting. And, yes, open a Twitter account and follow every one of these people!

It takes a village. So cue the Sister Sledge. And let us be bold. Together.

Update April 14, 2014:
Final tally for #LAThtrAwards hashtag for last week (which began the day of the LA Weekly Theater Awards):

For a brand new idea and an organic, grassroots execution, these are solid numbers, indeed. Well done, LA Theater!