Eclipses fascinate us because they play with our very definition of “reality.”  We define “day” as when the Sun is above the horizon.  So, even when there is heavy cloud cover and rain, we still see light during the day.  Except, of course, when the Moon inserts itself directly between the Sun and Earth.  Then, for a little while, the Moon’s shadow passes over Earth.  And if that shadow passes over us, the sky will become dark despite the Sun’s position above the horizon.

For a few moments, we experience nighttime during daytime.

There is nothing in physics that says this has to be the case.

For example, when Venus gets between the Sun and the Earth, it barely covers a small percentage of the Sun’s disk and looks like a small dot to us on Earth.  So how does the Moon cover up so much of the Sun while Venus, a much larger body about the size of the Earth, does not?

That’s a bit like asking who will appear larger:  the 4 foot 5 inch Peter Dinklage standing 1 yard from you or the 6 foot 6 inch Michael Jordan standing 100 yards away?  It’s pretty obvious that the nearby Dinklage will fill more of your field of view than the distant Jordan and therefore will appear larger, despite the obvious size differences.  Similarly, this is how the tiny, but close, Moon can appear larger than Venus to us on Earth.  Or how the Moon can appear as large as the far more massive, but also far-away, Sun.  So large, in fact, that through a heavenly coincidence they appear to be the same size. 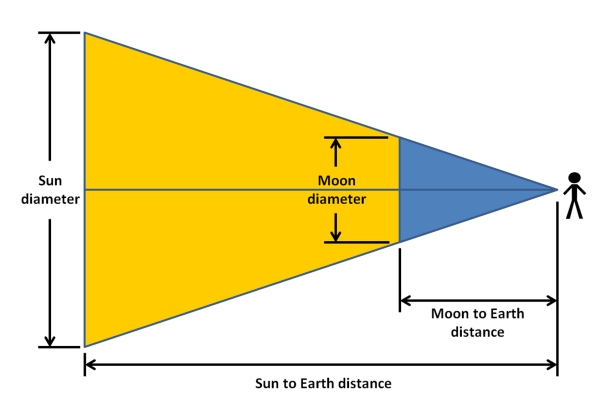 The drawing also gives us the intuitive feel that the two triangles are proportional to one another.  We could prove that fact rigorously using 2,300-year-old Euclidean geometry.  Let’s stay focused, however, and instead assume our intuition is correct (and it is).

Not bad for a simple estimate!

But we can do better.  In our distance estimates, we assumed we were standing at the center of the Earth.  I don’t know about you, but I usually stand on the Earth’s surface, not its center.  That means we are closer to both the Sun and the Moon by the radius of the Earth, a distance of 6,371 km (3,960 miles).  This number is a minuscule amount compared to the distance to the Sun but it’s nearly 2% of the distance to the Moon.  So if we re-calculate the distance from the Moon to the Earth’s surface as 378,000 km, our revised ratio estimate of the Sun’s diameter is 1,375,000 km (854,000 miles).  This new estimation is accurate to the actual number by 1%!

When you consider that we modeled the elliptical (oval) orbits of the Earth around the Sun and the Moon around the Earth as perfectly circular (with a single radius that doesn’t change during the orbit), the agreement between our simple estimate and the observed measurement is even more impressive.

Why is it that the Sun is both 400 times wider than the Moon and also 400 times farther from the Earth?  It’s a cosmic coincidence.  Literally.  Because of it, the curvatures of the two disks, Sun and Moon, match precisely.  As a result, scientists have been able to cleanly observe and study the Sun’s atmosphere (the corona) and the Moon’s mountains and valleys during the few precious minutes of totality.

So, whether you watch a solar eclipse on a news feed or travel to the shadow itself, remember this marvelous celestial dance springs from the rigorous certainty of classical physics with a sprinkling of random correlation.  The vastness and diversity of the Universe allows for many possibilities.  We are fortunate one of those possibilities, a stellar synchronicity, is so near.  It provides us something to enjoy.  And to ponder.

2 thoughts on “A Fact Often Eclipsed”