If you are of a certain age, your cultural life was dominated by Garry Marshall’s touch. The Odd Couple. Happy Days. Laverne & Shirley. Mork & Mindy. Pretty Woman. The Princess Diaries. He helped Ron Howard get cast in his first film (George Lucas’ American Graffiti) and directed Jackie Gleason in his last (Nothing in Common with Tom Hanks).

And these are just a few highlights of his career.

To theater goers in Los Angeles, he was also the founder of the Falcon Theatre. As he discussed in a 1999 LA Times interview:

I love theater. I thought I was going to go into theater. My mother dragged me to the theater. She always said that live entertainment is magic. She got it in my head that live was great.

Patrons knew that Garry Marshall would be at a Falcon opening night if he were in town. That’s where I chatted with him last month at the opening of Tennessee Williams Unscripted. He was excited to talk about his most recent trip to New York where he was working on a Broadway adaptation of Pretty Woman. Bringing his largest film to live stage would be his final project.

It’s not stated explicitly on the Falcon Theatre’s website but the theater’s name derives from a boys club Garry belonged to as a teen in the Bronx. I know this because my Cousin Gary was in a rival club, the Mohawks. They had been friends for years, beginning in childhood. 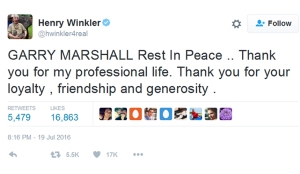 It’s telling Garry chose a name from his early years for his theater. He was about the enduring bonds of family and friends. Ask anyone who knew him. When I told Garry that I was Cousin Gary’s cousin, his eyes immediately lit up: “How’s he doing? Is he still in Florida? The last time I talked with him he was in Florida.” He asked for my cousin’s number and reconnected with him. They were both 80 years old at the time.

Garry Marshall died on July 19 at the age of 81. There will be many kind words from the entertainment industry for this kind man. His passion for creating and his energy for loving serve as inspirations to the artistic community he so strongly influenced.

And since this is a remembrance of Garry Marshall, it seems appropriate to go out on the funny. This is my favorite performance of his:

Originally published July 19, 2016 in Footlights. The tribute in the printed edition included these tweets: