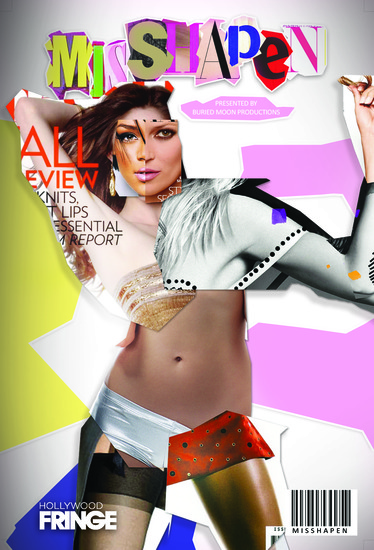 The very first way an audience experiences a production is through its title and MisShapen may be the best title I’ve seen at this year’s Hollywood Fringe Festival. It’s compact, smart, and immediately gets across what the show is about: women’s body images. The production’s poster reinforces this idea and expands upon it by reminding us that, in today’s world, bodies are reduced to scrutinized individual parts. The poster also inadvertently telegraphs a serious problem with this musical production: the play, too, is a collection of individual pieces that sort of become a whole but not quite. And that’s a shame because some of those pieces are very taut and attractive.

The show’s program states that MisShapen is “a collaborative piece” with no single author. Instead, it was created from contributions of the 11 actors in the cast, 2 additional people on the creative team, and the 2 co-directors, David Anthony Anis and Annalisa Sevaly. That’s a lot of cooks trying to make a single broth. Furthermore, for a production where a major theme is the value of individuality, it’s ironic that the program simply lumps the cast members into a single list without regard to role or scene.

MisShapen opens charmingly with the evening’s musicians (and musical directors), Daniel Nakawatase (keyboardist) and Julien Tan (guitar), slyly singing a soft, gentle version of “Fat Bottom Girls.” We then meet the 3 leading women in our journey: Kate (Jessica Gaupel) who has a hyperactive imagination and a dog that can speak, Marabelle (Mieko Sudduth) whose eating disorders impinge on her relationship with her boyfriend, and, lastly, the introverted photographer “B” (Joanne Yuan). The universality of their stories is cleverly emphasized by having each character of a different race. Gaupel’s intentionally high-strung performance – handling mouthfuls of hurried dialog with ease – is especially compelling and her nuanced comic timing never overwhelms an underlying vulnerability. The balance of the cast forms the ensemble though every actor will have a spotlight moment with either a poem or song.

There are hints of tremendous potential in the script. Perception via the visual arts is thematically woven throughout: We meet Kate in an art museum. Marabelle paints at an easel. “B” constantly takes photographs (although the directors need to stop flashing the camera’s strobe into the audience’s eyes which have adjusted for the dark theater). Actor Arianne Ousley smears herself with paint while reciting the monologue “Oreo.” The scenes’ title cards have a simplified Jackson Pollock feel. And yet, there is no cohesion to this rather large group of symbols. We get the impression that the creative team is merely throwing spaghetti on the wall in the hopes of our finding a pattern in what sticks.

Similarly, the ensemble pieces are uneven. There is a very tightly choreographed group dance regarding food (where Richard Rodriguez appropriately, but bravely, lets his belly hang out from an undersized shirt labeled “CARBS”) but this is offset by the sloppy staging of a “Pity Party” number where Kate laments to her come-to-life stuffed animals. Rodriguez delivers (and perhaps wrote) one of the show’s highlights: a powerful monologue about a person’s true inner nature. For the most part, however, the monologues are seasoned with a Sylvia Plath angst that is relatively safe for this type of production.

Finally, the script suffers from a lack of thematic complexity. The idea of examining negative body images – particularly in Southern California where many of the “ideal” images are first created – is ripe with possibilities. For example, ads created by smart professionals using the best psychological theories cannot be dealt with by simple mind-over-matter discipline. Twenty-first-century food is created for corn subsidies and not nutrition. Obesity is on the rise and a serious health issue; it is possible to be truly fat. In contrast to these topics, MisShapen often comes across as a basic affirmation about body acceptance. A core writing team might have enabled a more consistent production with themes more thoroughly explored.

Nevertheless, MisShapen concludes with an impressive transcendent moment. One-by-one, each member of the cast appears onstage, each repeating a unique body awareness mantra over and over, until the cacophony of different pitches, different words, and different voices rises to a crescendo which suddenly becomes a complete whole and, in a singular instant, we are at one with the cast. Once that apex is reached, the actors move off stage, one-by-one, still repeating their individual mantras until we are left with the final actor and the final mantra.

It is the type of experience that can only be realized by live theater.

So, despite the production’s unevenness and meandering storytelling, MisShapen might be worth a look. The cast’s enthusiasm is undeniable and many of the show’s individual pieces work well and deserve an audience. I’m hoping the artists will be able to reshape this material and elevate it to the bar set by their magnificent finale which will not soon be forgotten.
Final thoughts on the 2013 Hollywood Fringe Festival: Ich bin ein Frïnger