Anyone else remember Highlights for Children magazine? Even at age 7, I was kind of offended by its “Fun with a Purpose” tag on every cover. That’s the type of slogan adults will recite to prep you for the “sex is for procreation” line they’ll foist on you a few years down the road.

Highlights is the sort of thing you’d only read in the dentist’s office, when there was literally nothing else to do. The monthly magazine was so blandly “fun,” it made Mr. Rodgers’ TV show seem edgy and emo by comparison (don’t get me started on Lady Aberline and her carnal relations with a biblically-named tiger). Still, the magazine’s huge size allowed you to hide behind it while waiting for the dentist. The oversized pages acted like a noise screen against the sounds of both high-pitch drilling and high-pitch screaming just beyond the dental assistant’s station.

So there was a reason to pick it up in the waiting room. And normally you’d first dive into the “Hidden Pictures” page. And prayed that some idiot kid didn’t already circle the items cleverly hidden in the larger picture, ruining the entire feature. Of course, the prayers would almost never be answered: all the hidden items would be circled, usually in ink. All, that is, except for the ever elusive hidden toothbrush the editors would manage to sneak into each issue. (In deference to dentists being the magazine’s largest subscriber group, I suppose.) 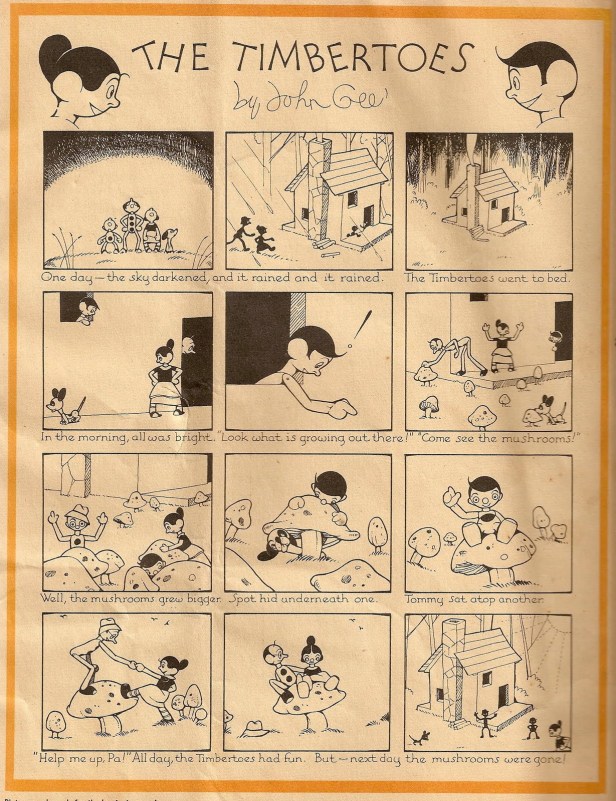 There were other regular monthly features in the magazine, as well. The Timbertoes were a family of wood-people drawn in a wood-cut style with a wooden plot-line. The visuals in the multi-panel cartoon always struck me as downright creepy. I never understood why it looked like only the mother wore clothes while the father and the son went about buck naked, showing their wood.

Fun with a purpose?

And then there was Goofus and Gallant. You remember this one, right? Two kids: one a sociopathic narcissist and the other one just a tad more saintly than Mother Theresa. They would always be placed in some type of contrasting situation to make a point:

Goofus can’t find the hidden pictures’ toothbrush and so circles all the other hidden objects to spoil the puzzle for other children.
Gallant can work the puzzle in his head and finds the toothbrush within seconds.

Goofus shows his friends the Penthouse magazines he found in his father’s bedroom.
Gallant leaves his own personal Highlights magazines – with the pristine hidden picture puzzles – in the dentist’s office to share with other children.

Goofus believes classic plays must only be unusually staged to satisfy the very élite in the audience who have already seen them produced multiple times.
Gallant remembers the magical first time of every classic play he’s seen and is envious of the virgins in the audience experiencing the material for the first time.

Goofus fantasizes he is writing for TDR.
Gallant knows his newspaper audience is mostly intelligent laypeople with a general interest in the arts.

Goofus is certain he is the voice of every person possessing intelligence and taste.
Gallant recognizes he is just a single person with an opinion.

I dunno. If life were all about a black-hat/white-hat contrast, I guess I prefer the Spy vs Spy feature found in Mad Magazine. You know: where the fun was definitely without a purpose.

Oh, yeah. One time I actually did find the damned toothbrush. It was delicately placed in the creases around the circus elephant’s anus. Which, I’m pretty sure, is a location that the ADA would not recommend. For a variety of reasons.

Still, it’s amazing what you can hide on a printed page, isn’t it?